Driving in the South Bay on my way home from Huntington Beach, I passed by Belacan Grill, a Malaysian restaurant. Even though I just had lunch, I could not resist stopping. After all, its hard to get Southeast Asian food in Southern California. Besides, I could just buy takeout and have it for lunch the next day. 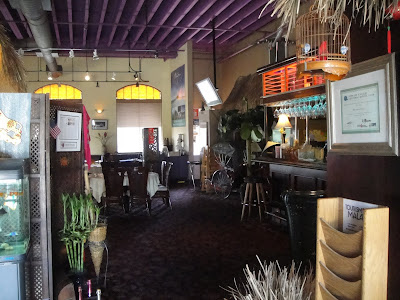 The restaurant is decent sized with a full bar and adorned with promotional articles for Malaysian Airlines. I examined the menu. Hainan chicken, rendang, fish head curry. I decided to order something that wasn't too pungent that would offend my colleagues if I heated it up in the microwave. 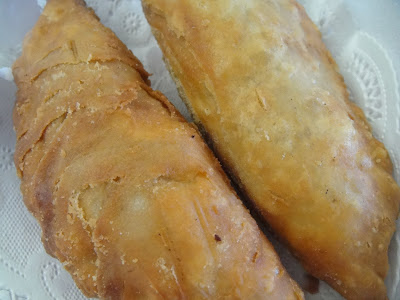 Curry puff came with two pieces. Curry puff is somewhat similar to cornish pasties in the U.K. Yes, I said that I was full, but it was freshly fried so I had to have one on the ride home. Curry puff is filled with spicy potatoes and onions, fried in pastry dough. There was a delicious place in Singapore called Old Chang Kee that served the best curry puffs and spring rolls. From what I remember, it was merely a stand where you would watch as an elderly gentleman would freshly fry up your order. Wow, looking at the website, the price is now $1.20. I think it was 50 cents back in the day. Belacan Grill's curry puff was delicious and very similar to the ones served in Singapore. 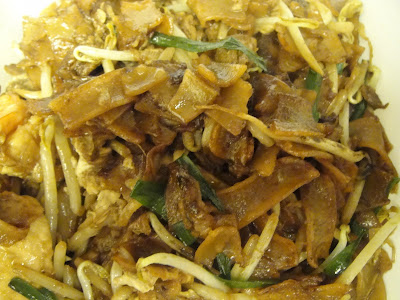 Char Kway Teow, a classic Malaysian/Singaporean dish. This is stir fried flat noodles with chicken, shrimp, eggs, bean sprouts in spicy dark soy sauce. My mom used to take us to Outram Park (in Singapore) for the best kway teow that I've ever had. Their version had cockles, fish cake and little chunks of lard. The kway teow at Belacan Grill was not authentic, in my opinion. Kway teow has that sweet flavor, most likely from the dark sweet soy sauce. I was disappointed with this dish because it did not taste one bit like the original. Instead, it tasted like the type of flat noodles you would order at a Thai restaurant. Except that at least at a Thai restaurant, their noodles are flavored with delicious fish sauce. Some reviewers online said that this dish from the restaurant was delicious, authentic and salty. Mine didn't have much flavor so I reckon that they must have left out the main ingredient. The dark soy sauce that gives kway teow that distinct flavor was likely missing in this version.

I'd really like to give Belacan Grill another chance. If it was an honest mistake, I can overlook it. But if they honestly believe that this is what char kway teow tastes like, then perhaps I've been eating something completely different my whole life.

an Indo pal of mine loves him some Belacan. But I'd prefer my Thai noodles a bit soupy and 300% more spicy...