My friend Heather was in town and staying at the Beverly Hilton so we decided to meet at Trader Vic's for late dinner/drinks. Trader Vic's used to be a unique restaurant in the space beside the hotel, unfortunately it closed two years ago. Instead, a smaller version is now located in the hotel itself. From what I remember, the original Trader Vic's had a tropical and tikki feel to it, was dark and fairly casual. The reborn establishment is now a cleaner, brighter space. There is a large tree in the poolside patio and the restaurant has surf videos projecting onto a white wall. 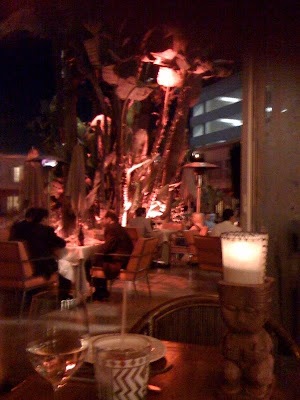 The drink menu includes all types of fruity rum drinks. In all honesty, they all don't look appealing. The food menu included various Polynesian influenced dishes, of which the appetizers looked the most appealing. 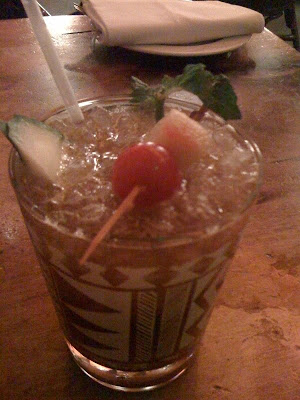 Suffering Bastard; rum, limes, cucumber. It was shockingly strong initially, but when you had time to recover, you realized that it's actually disgustingly sweet and gross. It had a very strong coconut flavor that was a bit overwhelming. At $16.50, it was also a rip off. 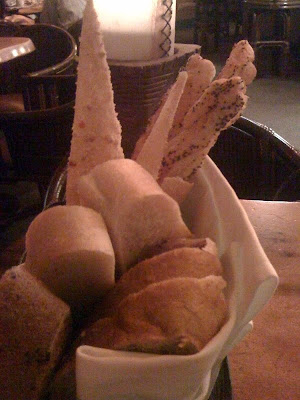 Service was a little slow even though it was not crowded. We were waiting over 30 min for our food while everyone else had bread at their table. The bread, when it finally arrived after we requested, came in a basket that included cheese sticks, regular and olive bread. The bread was cold and the butter was unsalted and not very tasty. 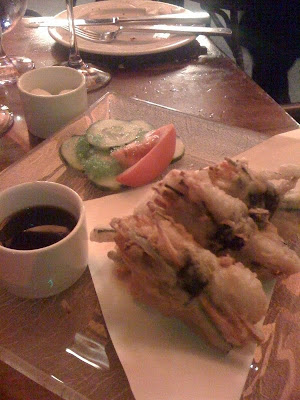 Lobster tempura $20. Basically lobster and vegetables, wrapped in a bundle and fried. I liked the green masago/smelt egg that was served on the side with cucumber. To be honest with you, it did not even taste like lobster. I thought it was shrimp. It was just OK, but at that point I was so hungry that I could have eaten anything. Thai red curry with beef. It is outrageous that curry can cost $32. At that price, you would expect a vat of curry. Also, it was served with the smallest bowl of rice. All complaints aside, the curry was actually pretty good. It was spicy and creamy, and included squash, eggplant and carrots. 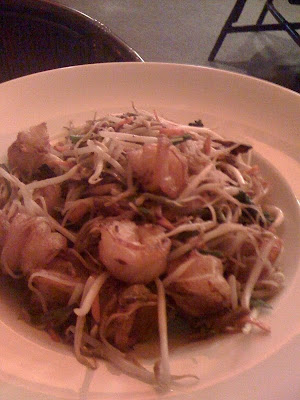 Wok fried noodles with BBQ pork, shrimp and mild curry sauce. First if all, when they say mild curry, they mean mild curry; you can barely taste curry, which is a little-goes-a-long-way type of spice. Second, the BBQ pork was nearly non existent, in fact it seemed more like noodles with shrimp, instead of with BBQ pork. The pork was also dry and unappetizing, unlike the succulent versions you would find at an authentic Chinese restaurant. 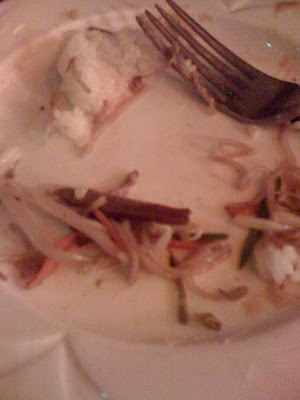 Evidence above. You can see how measly the BBQ pork was! It was quite pathetic, if you ask me. They might as well have left it off the plate.

So I also have to comment about the service.

#1. We were left waiting for almost 15 minutes until someone came to take our order. Come on, I am in the bar area and I obviously needed a drink after working an over-12 hour day.
#2. It took another 30 minutes for even our appetizer (lobster roll) to be served.
#3. The waiter was always buzzing around us and was making my friend uncomfortable.

Trader Vic's, in its old form, was kind of cheesy but fun. At least there was something unique about it. Instead, the new place is a generic hotel restaurant with overpriced food and uninspired staff. If you are looking for something exotic, don't even bother with Trader Vic's. But if you are staying at the Beverly Hilton, I suppose it will do.

I agree with this review 100%. The service was so bad and food so overpriced - this could be overlooked (a little) if the food was amazing, but it was mediocre at best. The restau did have a fairly extensive sushi menu that we didn't try and I'm a bit curious about, but not enough to go back any time soon.

The new downtown location is much nicer...and ordering a variety of the appetizers is definitely a way to go...