You get only ONE choice: Brunch @ Ad Hoc, Yountville 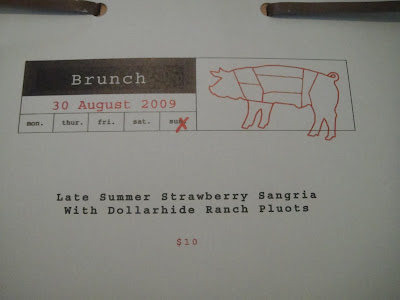 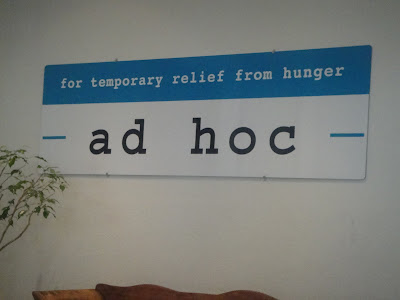 Sunday marked the end of our Northern California trip. How can you top off two amazing dinners (Fleur de Lys and Bistro Jeanty) and fun filled wine tasting? Perhaps dine at a Thomas Keller restaurant. Ad Hoc offers a family style menu that changes daily. Family style means they serve a big plate to the table instead of individual plating. Four courses for dinner and three for brunch. There is one catch- You really don't have a choice of dishes. So for a picky eater like me, I was a little nervous. 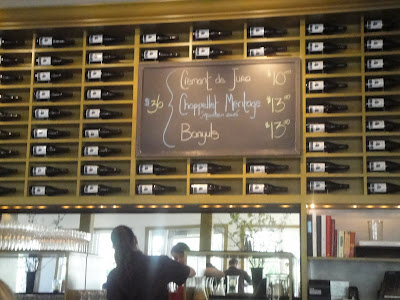 The restaurant is named Ad Hoc because it was initially supposed to be a temporary restaurant until Chef Keller conceptualized his new restaurant. But due to its popularity, it became permanent. It is located near Bouchon Bistro, another Keller restaurant. These two restaurants are a casual counterpart to the famed French Laundry, where your minimal spend is over $260 per person, and that is if you only drink tap water.

We started with the Strawberry Sangria. There was a cherry-pepper-salt-sugar coating on the strawberry garnish. Refreshing hair of the dog. 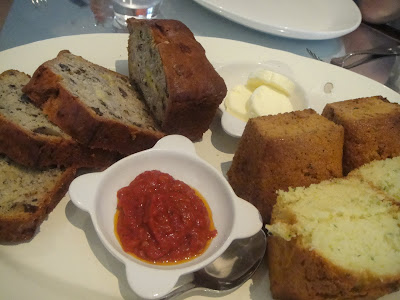 1st course: assortment of baked good from Bouchon. This included zucchini bread and banana bread. They were served with two condiments: a tomato puree and sweet butter. You really did not need any of these as the bread was flavorful as is. No wonder Bouchon is known for its bakery, because this was delicious! My favorite was the zucchini bread that was fluffy and not dense. Since most at the table were hungover from our massive amounts of Irish car bomb shots the night before (ouch), they were not too hungry and I ate more than my allotted share of bread. Thank you 2 Advils for curing my hangover...
Heather was craving bread that was not sweet so she asked for some regular baguette. 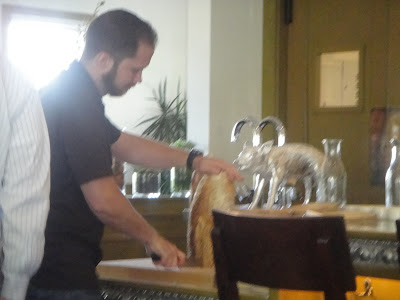 We watched as our waiter took a enormous baguette (picture above only reflects 1/2 the size of the baguette) and sliced it expertly. 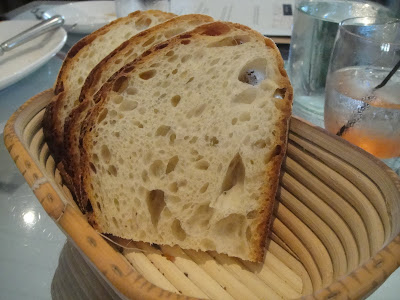 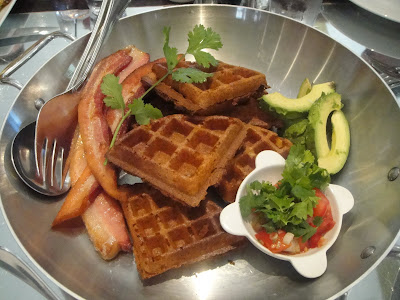 2nd course: Huevos Rancheros with Cornbread Waffle
The waffles had a little spice to it. Dilu did not like it, but I actually really enjoyed it. The cornmeal made the waffle a little more filling. It was served with avocado and huge slabs of bacon. I didn't care for the bacon as it was mostly all fat. Yes, I know I'm weird: I love fatty bone marrow but not bacon fat. 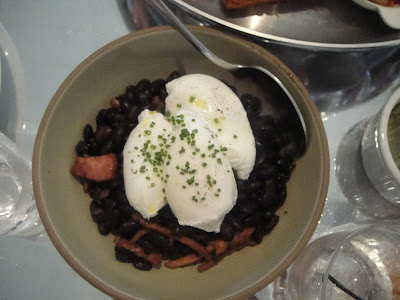 The beans and poached eggs were served separately. The beans were just OK; I didn't think there were the prominent flavors that you would expect from a Mexican inspired dish. The eggs however were perfectly poached. 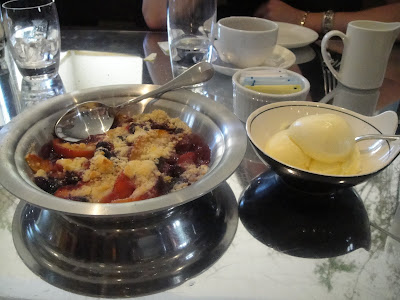 3rd course: berry crumble.
The crumble was way too sweet and a little unbearable to eat. I was also hoping that there would be more crumble (that's the best part!) but the layer was sparse. I did love the perfect quenelle of ice cream.

I was actually rather disappointed with Ad Hoc. First of all, our waiter must have been hungover as well because he was agitated and not friendly. The maitre d'/manager however was welcoming and chatty. Secondly, I expected better food from a Thomas Keller establishment. The food wasn't anything special. Perhaps the dish did not come together because the ingredients were separated. The meal seemed like something you could throw together yourself and I felt like I was in a cafeteria; with beans on one plate and waffles on another. Also I don't think it was worth the $65 per person. Maybe we should have gone to Bouchon instead..

Your telling comment was when you called yourself a "picky eater."

The problem, dear heart, was not with the food, but with YOU.

Hi myrrander, when i said i was picky, I meant I was picky with ingredients (don't like cheese, olive etc).. but bland beans and overly sweet crumble, I think anyone would disapprove. I guess what I was trying to express was that it was a very average meal. One wouldnt have guessed we were at Keller's Ad Hoc. Thanks for stopping by!