Can you stomach this? Offal at Sam Woo & Pho So 1

It's the Friday before labor day, I get the day off (thanks, Corporate giant) and decided to spend it with my parents. The minute I walked through the door, my mom asked me what I wanted for lunch. Pho was on my mind all morning and my friend Nate said that the closet authentic pho is in Van Nuys at Pho So 1. Pho is Vietnamese beef noodle soup, served with rice noodle, basil, bean sprouts and green chili. There are many variations of meat that you can get in the soup; flank, brisket, steak, tendon and tripe.

We decided to pop over to Sam Woo BBQ Restaurant that is located in the same mall as Pho So 1. Sam Woo serves Cantonese BBQ items such as roast duck, soy sauce chicken, rice and noodles and of course, BBQ offal such as intestines, heart and stomach.

In the same complex is 99 Ranch Market which is an Asian market that sells just about anything at very good prices, especially the produce. It is a tradition for my father and I to sit at the table, crack open a crab and slowly work our way through the crevices. Therefore, my mom purchased two fresh crabs for us. 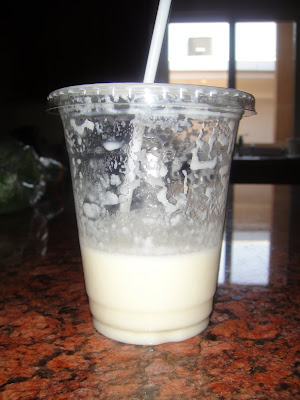 Durian shake from Pho So 1. Durian is a prickly, tropical fruit, popular in Southeast Asia. It is something that even bug-eating Andrew Zimmern had trouble eating. Many compare its scent to vomit or feet, but if you grew up eating it, it smells fragrant and unique. The smell is so pungent that it is banned in most public places in Singapore. 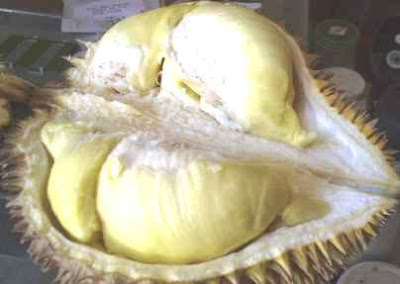 It's hard to find durian in the U.S. so when I saw the shake on the menu, I ordered one immediately. The drink was thick, creamy, sweet and had that distinct durian flavor. 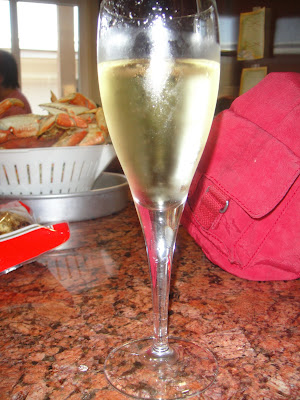 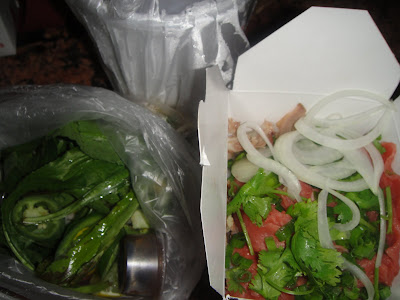 Pho #1 includes flank, tendon and tripe in a lovely broth with the fixings. When you buy pho to go, they pack all the components separately. You have the broth, the noodles, the raw meat and the vegetables. Even though the broth is piping hot, I like to heat it up in a pot and cook the bean sprouts for a bit. When the sprouts were cooked, I switched off the fire and mixed in the noodles and meat (the last two ingredients cook really quickly so the heat from the broth will cook them). 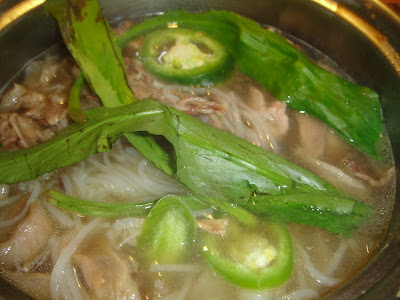 The green chili added a hot, spicy flavor to the soup. The broth was so delicious, it had the intense beef flavor as well as some spices. The meat was sliced thin, the tendon was soft and almost buttery, and the tripe was chewy. Pho is really Vietnamese comfort food and even on a hot summer day, the hot soup was satisfying.

Up next, our food from Sam Woo.
DISCLAIMER: Don't look any further if you don't like the sight of offal. 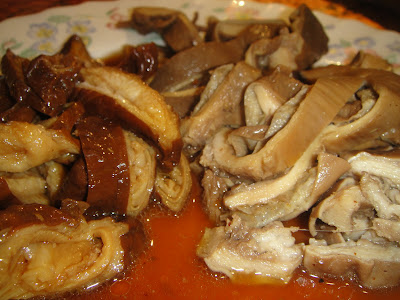 Stomach and large intestines. At Sam Woo, the offal are displayed whole, but after you order, they slice them up into tiny bite size pieces. A lot of people will not be able to handle these because of the texture; it's rubbery and chewy. And yes, stomach and intestines taste like what you would expect; a little gamy. Both were flavored well; in soy sauce and sesame oil. 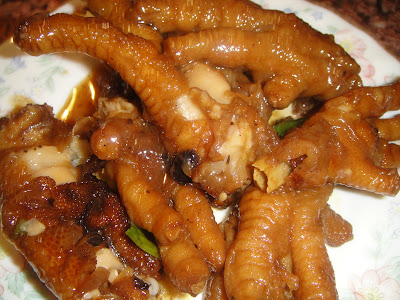 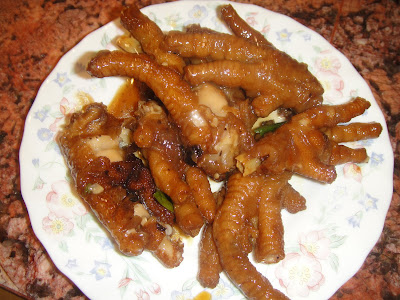 Chicken feet, another Asian delicacy. Chicken feet is basically all skin, bones and cartilage. This version was stewed in sauce so it was very tender. It takes skill to eat this. You put a piece in your mouth, then separate the skin from the bones and spit out the clean bones. Repeat. 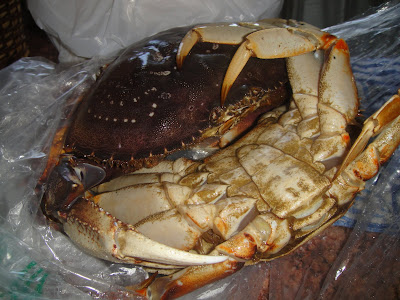 While we were eating the pho and offal, my mom prepared the crabs by boiling them. They were two pounds each, alive and kicking. 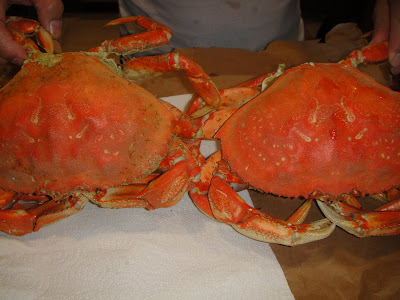 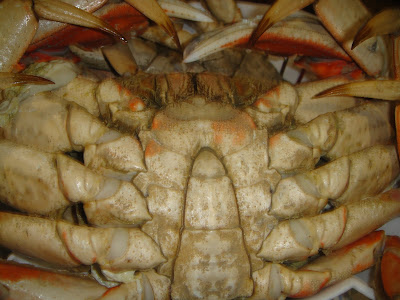 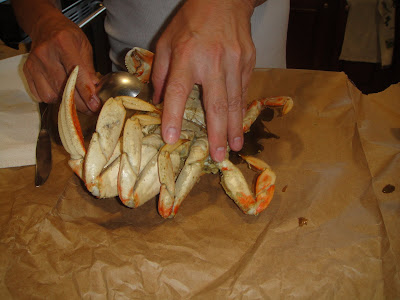 Dad, performing surgery on the crab. He's an expert at this. 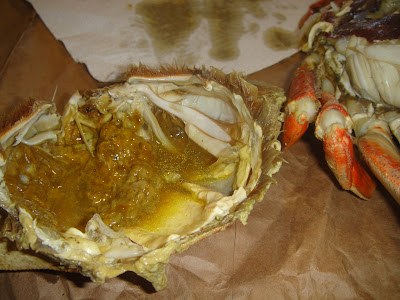 The meat was tender, sweet and did not have a fishy smell. This is an indicator of a fresh crab. There was also ample crab mustard or the greenish yellowish substance in the shell, which I happily gobbled up. Eating crab in its shell also requires skill and it takes patience to slowly dig out each scrumptious meat from the crab chambers. But oh, it always tastes so good when you have to work for it.

To end the meal, I needed something sweet. While at 99 Ranch Market, I noticed that mooncakes were on sale so I bought a tin box of it. The box includes four cakes. Mooncakes are Chinese cakes that are eaten during the Moon Festival in the Fall. The story goes: The Chinese were staging a coup against the Mongols and in order to communicate internally without tipping off their enemies, the Chinese hid notes in the cakes. The cakes are made of a paste (most commonly lotus) and sometimes contain a salted yolk. Other fillings include bean and taro. The crust is typically a chewy layer. 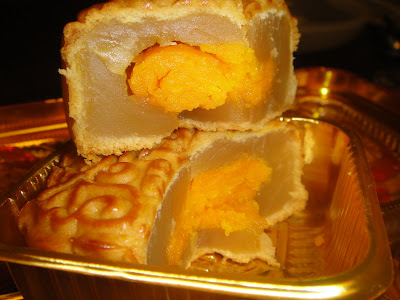 The mooncake was scrumptious. The salty yolk and the sweet paste worked well together. The cake is rather dense so even half can often times be sufficient.

Everything that I had was delicious and not something that I would eat with most of my friends, who would shudder at the sight of stomach and intestines. My parents are the perfect eating companions for offal. They love it too, and they won't judge.