Hotel Erwin is a boutique hotel from the Joie de Vivre chain. It is located in the heart of Venice Beach, right by the surf., Although it has been around for a couple decades, the hotel was recently renovated. Hotel Erwin has a restaurant and bar, named Hash and High respectively. Smart name. We decided to brunch at Hash over the Labor day weekend.

The hotel is located a stones throw away from the beach, by the boardwalk selling everything from food to souvenirs and tattoos. I've been to High Lounge for drinks before. I love the view of the ocean, but I didn't particularly like the space. There was a protruding roof in the center of the rooftop bar area which took up prime real estate. The cocktails were interesting though, incorporating fresh fruits and juices. Likewise, Hash Restaurant's menu focuses on fresh ingredients. 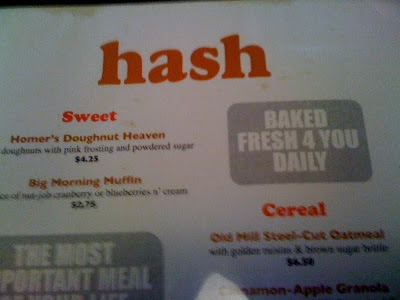 The menu includes a few variety of hash and other breakfast items such as omelets. The hash runs about 12 bucks and there are about four types. Breakfast is served with potatoes and choice of toast. If you order the hash, you get a fruit bowl in as well. Not a bad deal. 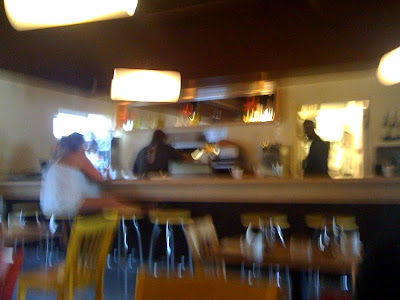 The restaurant comprises of a small dining room and a little outdoor seating area. The latter might sound like a good spot to dine on a holiday weekend, but in fact, it is not. The patio is situated right by the valet driveway, which will make for a distracting and polluted dining experience. We opted for seats indoor. 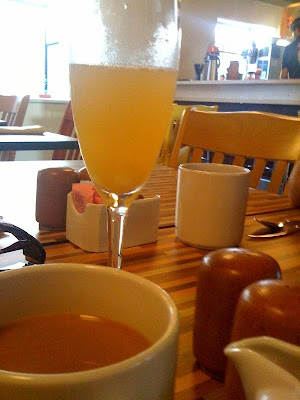 I started with a glass of mimosa. It will cost you nine bucks, which is actually rather expensive. You quickly forget that this is in fact a hotel restaurant and prices will most likely be inflated. At this price, I'd better only order one glass. 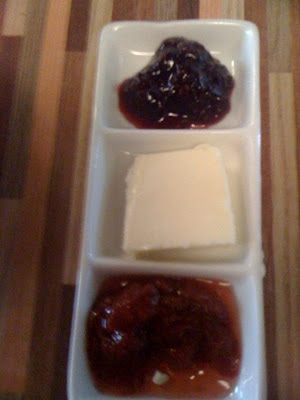 Strawberry and blueberry preserve, and butter. This was for the toast that would be served with breakfast. I thought the preserves were a little too sweet and did not seem homemade. It tasted like the Knott's Berry Farm jam that I used to eat as a kid. 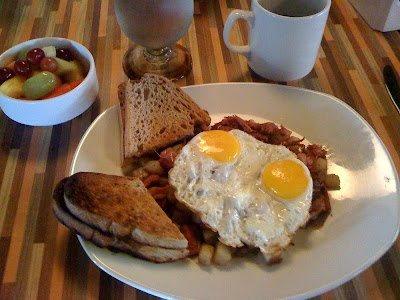 Stefan ordered the Angus corned beef hash with classic style hash, potatoes and caramelized onions. The components were delicious especially the corned beef, but the dish was too salty. 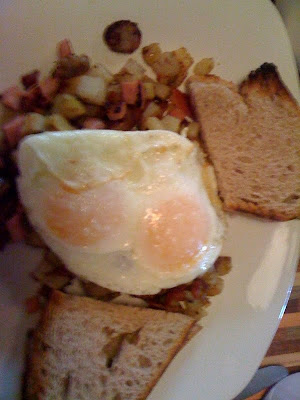 I ordered the Morning Glory Hash with smoked bacon, honey ham, sausage and sweet potato
Usually I would expect the ingredients of hash to be combined well and mashed together, however I mainly just tasted the potatoes. The ham seemed like it was just thrown into the mix but was not married with the potatoes. When I saw that sweet potatoes were in the hash, I was expecting a sweetness to the dish. However you can barely even taste sweet potatoes, in fact they weren't even the normal orange potatoes one is used to; they were just a shade different from the potatoes. I think the sweetness and vibrant color of the traditional sweet potato would have worked better. In addition, hash is typically so flavorful, however this dish was not. It's interesting because you would expect savory flavors given the ham and bacon, but instead the hash was bland. Perhaps they salted Stefan's dish twice accidentally and missed mine. 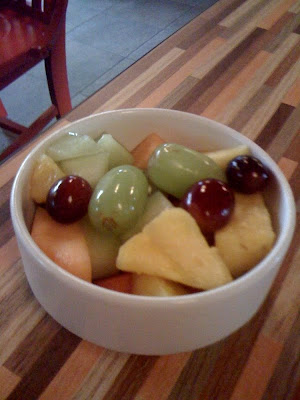 Side of fruit that was served with the hash. Nice variety of pineapple, watermelon, grapes and cantaloupe. 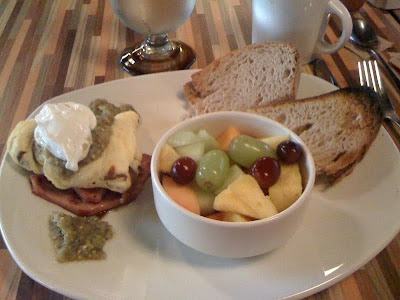 Allan ordered the Green eggs and ham (scrambled eggs with caramelized onions, sliced ham, tomatillo salsa and sour cream). I loved the creativity of the dish and the salty ham went well with the sweet caramelized onions. However when Allan decided to substitute his potatoes for the fruit salad, our waiter mentioned that it would be a small fee. The fruit salad, which was in lieu of the potatoes, cost an extra $3. I know that isn't much in monetary terms, but when comparing it to the cost of the dish (~$11), it seemed a little overpriced and I wished our waiter had mentioned it when we ordered.

Overall, I thought the meal was mediocre and the restaurant itself was nothing special. The hash was inconsistent; Stefan's was over salted while mine was bland. I can definitely cross this off my list; I doubt I will return unless for drinks at the rooftop bar.

P.S. Funnily, LA Magazine had the same comment re: saltiness in their November 2009 edition