After a hectic work week, I was excited to kick off the weekend with a movie. On the top of my list: Julie & Julia. As a foodie, I know I should be ashamed that I've waited a month to watch this movie about famed chef, Julia Child and how her life and love of food inspired a young writer.

Naturally, we decided to pick a French meal to end the night. Comme Ca is owned by Sona's David Myers. I haven't been too thrilled with Comme Ca because I've only had average meals before despite all the hype. The duck was dry, the marrow was under seasoned.... But I was hoping that they could redeem themselves. I think my expectations were too high when I first went because I was so impressed with Sona and expected the same of the sister project. This time, I adjusted my expectations. Hopefully they will not disappoint. 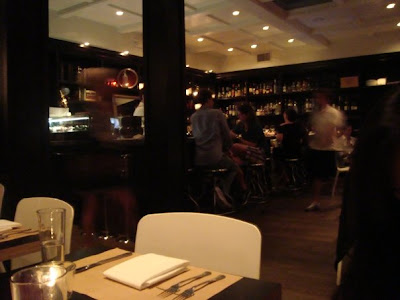 The decor is typical French, with black and white interior and a loud dining room, but in a very new and modern way. The patrons were trendy West Hollywood types, sort of like the same clientele that dine at SBE establishments. The menu is typical brasserie fare, and the restaurant is known for its mixologists and cocktails. 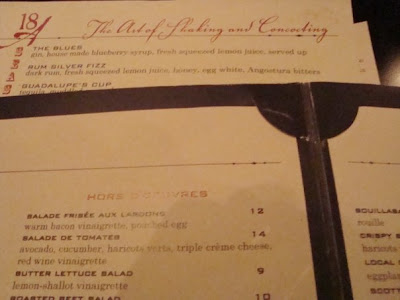 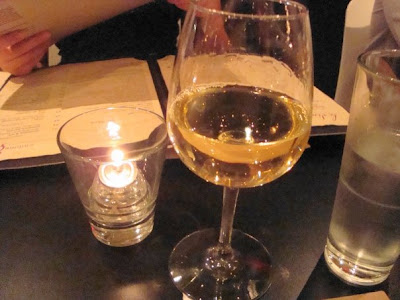 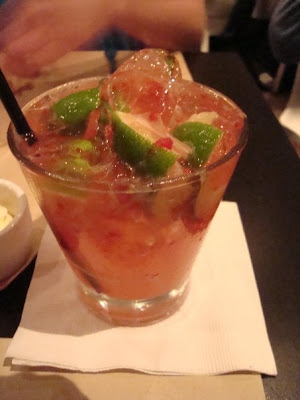 Caip-Germain-Ha which is a variation of the Brazilian drink Caipirinha.

Since it was such a late dinner, we did not want to pig out too much. We shared an appetizer and ordered an entree each. 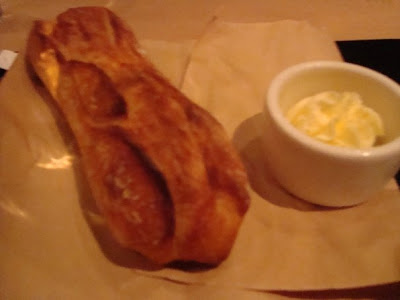 A mini loaf of bread served in a brown paper bag. The bread was really crunchy but I liked it; others may disapprove because they might chip a tooth while eating this. 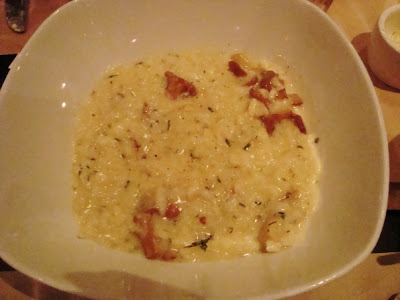 Mushroom risotto as the appetizer. It smelt really good; earthy like truffle. The cheese was rather mild in a good way but the texture of the rice wasn't creamy like what you would expect from a risotto. I am sure it was prepared the proper way, but it seemed like the rice was precooked, then mixed into a creamy sauce vs. someone performing the laborious task of stirring the rice and adding more liquids. It didn't have that silky texture and was also very salty. 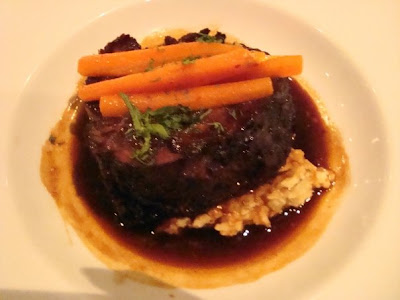 Paleron of beef bourguignon with potato salad. The beef was just OK. It was a little stringy but soft, however it was not one of the most tender beef stew I've had. Also, the sour potatoes and pickled carrots ruined it for me. They were tangy and I felt did not go well with the savory beef sauce. 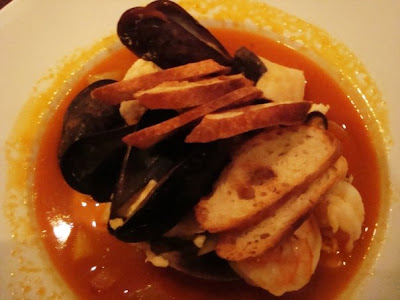 Bouillabaisse. There were mussels, clams, fish, shrimp and potatoes. The fish included halibut and cod, which were soft. The potatoes was cubed and flavorful. Although the seafood was fresh, the soup did not have that hearty seafood flavor reminiscent of a French fish stew. It seemed like once again, the components were cooked separately, then added to the soup, instead of the seafood being stewed and simmered in the soup. 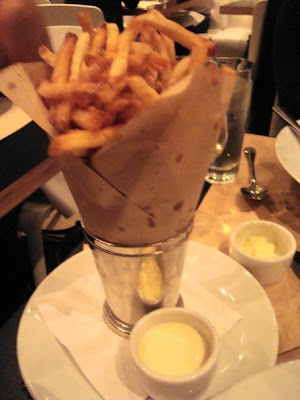 Side of pomme frites, served in a paper cone with a side of aioli. It was a generous portion, freshly fried and with the right amount of salt.

I found that once again, the food was mediocre. The flavors were not robust and comforting which is what you would expect from a bistro/brasserie. Yes, nothing was horrific but they weren't great either. I think David Myers named his restaurant appropriately: Comme Ca translates to So-So in English.

Hits: perhaps the fries and the bread
Misses: the dishes were all not that flavorful
Rate: **

Comme Ca never fails to unimpressive. 3 times, no mas. From burger to pork belly, nothing tastes better than anything coming out of my kitchen.

yeah, it's OVERRATED! I won't waste my time here. The next time I want French, I'll going to try Bistro LQ