Brunch in the O.C at Cucina Alessa

Before the popular High School and Housewives TV series, Orange County was a little known area outside of Southern California that is mainly known as home to Disneyland. These days, most know of the O.C's blond babes and sandy beaches. Huntington Beach is about 40 miles from the Westside, but it only takes about 30 minutes if you are zipping on the 405 on a early weekend morning. I was impressed with the clean streets and modern houses in the O.C.- very different from LA. It's no surprise that most people move south when starting a family. 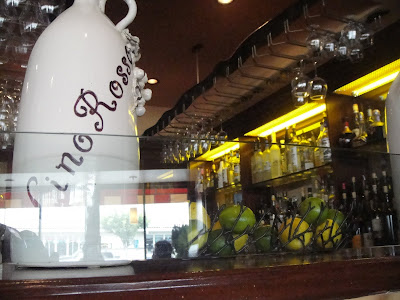 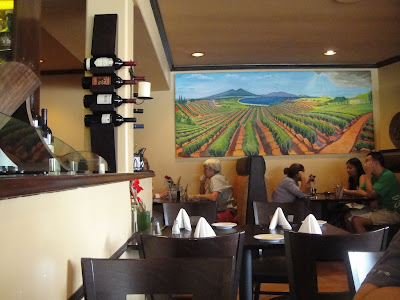 For Sunday brunch in Huntington Beach, we decided to find a spot away from the pier. We stopped in at Cucina Alessa, an Italian wine bar/restaurant that is located on the part of Main Street that is away from the pier and its crowds. The restaurant is fairly new and it's original location is still in Newport Beach. The place is modern and trendy; and you can sit in their booth seats or outdoor tables. The latter was all snapped up given that the sun was out. Although I felt a bit under dressed here (we were in our grubby post surf outfit and covered in sand), no one gave us a dirty look.

They were still serving breakfast at 11.30am and most of the breakfast items were priced at less than $10. 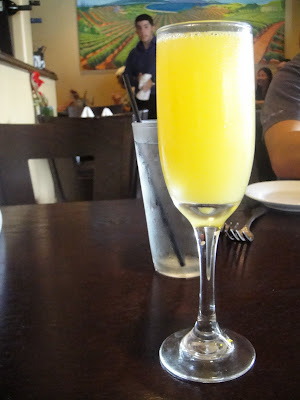 Glass of Mimosa, of course. 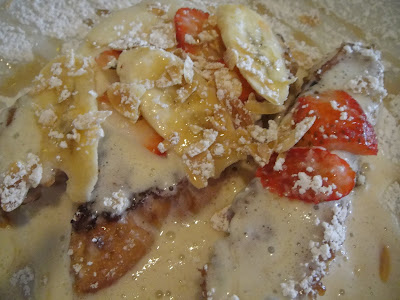 "Illegal" French Toast: thick slices of french toast dipped in vanilla and cinnamon egg batter, grilled and topped with bananas, strawberries, marscapone cheese and toasted almonds. When I first saw it, compared to the guys' omelet, I was envious. Mine looked tiny compared to theirs. I had a feeling I was still going to be hungry after this. The sauce also looked really rich and creamy. Will this give me a tummy ache?

Thankfully, the french toast was absolutely delicious. It was soaked in lots of butter and cream, and was sweet but not overly. And if that wasn't enough sweet, the powdered sugar that topped the french toast was good as well. The toasted almonds gave a nice crunch to the rest of the dish. In hindsight, this was the right portion because the dish was so rich and I would not have been able to have an additional bite after I was done with my plate. 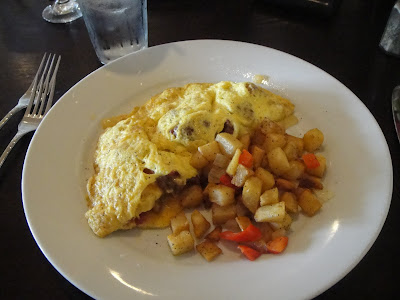 Bologna Frittate. Omelet, Italian sausage (substituted tomatoes for mushrooms), onions and provolone cheese. The omelet was good and the sausage was spicy and flavored well. The portion was also generous. 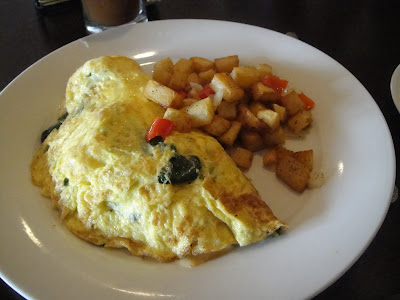 Sicilia Frittate Omelet with spinach, shrimp, onions and smoked mozzarella. The potatoes were delicious: crispy and cooked all the way through with the right amount of salt and pepper

The waiter forgot to bring out the side of toast that came with the omelets. When it arrived, it was only one measly toast each. Also, where's the butter? When we asked for something (butter or jam) for the toast, they brought over Kraft grape jelly that was so generic.

The food was actually pretty good and well-priced for a nice restaurant. Apparently it's a fancy dinner restaurant as well. I enjoyed my French Toast. It was an elegant and unique version of the traditional French Toast, but I was secretly wondering how many calories I had consumed.
Hits: french toast, away from beach crowd
Misses: forgot toast
Rate: **