Sake House Miro and some Autolux 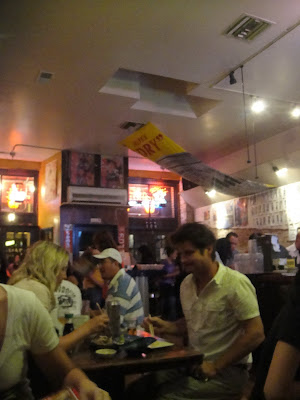 I had tickets for art rock band Autolux at the El Rey Theatre on Wilshire, by La Brea. The band was set to go on at 10.15pm so I had more than sufficient time to have a leisurely dinner. There are a few restaurants by the theatre; some upper scale (Campanile, Luna Park) and some casual (Shabu Shabu Ya, Sake House Miro, Unami Burger, Busby's East Bar). I was leaning towards casual and just wanted small bites instead of a full-on meal. Sake House Miro was the winner because of the option to dine tapas style. Besides little plates, the menu also includes sushi, sashimi and teppanyaki. There is a small parking lot adjacent to the restaurant that fills up quickly but I was able to find metered parking on the street when I got there at 8pm. I wasn't as lucky with the seating. There were already five parties ahead of me on the list. Don't forget to write your name on the list or you'd be waiting for your phantom table.

I waited about 25 minutes while two parties were seated and was surprised when they called my name next. Thankfully a table for two opened and the others in line ahead of me were parties of four or more. The restaurant is fairly small and is charming with wooden tables and chairs inside and lanterns outside. Japanese posters lined the walls and gave this place an authentic Japanese pub feel. 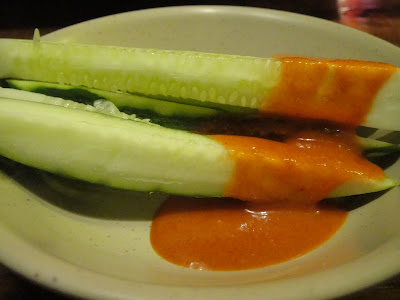 Complimentary side of cucumber with a spicy miso sauce was served. They make their sauces in house and the recipes are "secret". I liked the refreshing slices of cucumbers which is a healthy alternative to edamame or bread. The sauce was good and tasted a bit peanut. I wanted the mini uni bowl. At $3.95, it would have been a nice bite but they ran out. 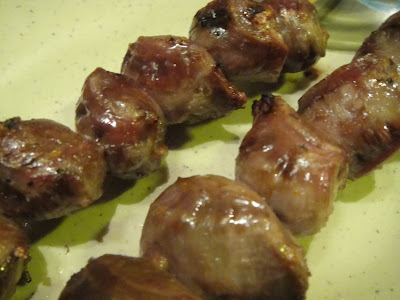 Gizzard skewer (served as a pair). The gizzards were chewy and lightly salted. Satisfaction. 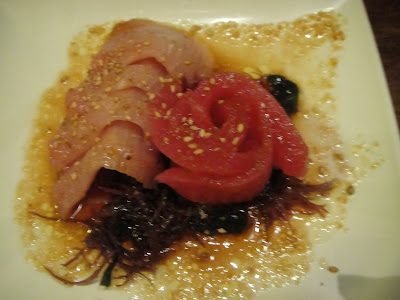 Sashimi carpaccio of fish; tuna and yellow tail in yuzu dressing. The fish was sliced thin and tasted good with the seaweed sauce that was citrus and salty. I am not into raw fish but this version was marinated in salty goodness. 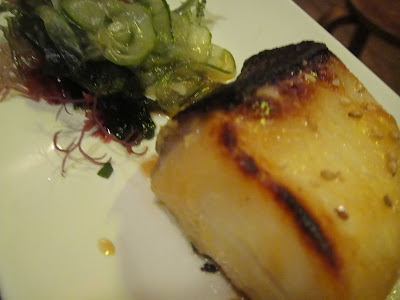 Butter fish (miso cod) that came recommended in customer reviews. I always have to get miso cod if I see it on the menu and it did not disappoint. The plate came with three pieces of cod and the fish was buttery, soft and melt in your mouth. I also liked the side of seafood and cucumber salad as well. 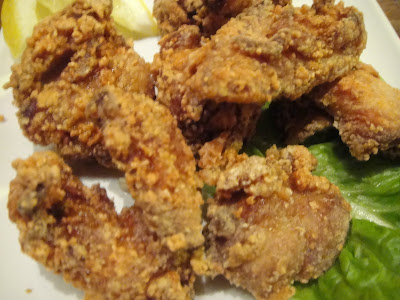 Karage. You can never go wrong with fried chicken. The chicken itself was delicious and seemed to be marinated in something sweet, and the breading was crispy. The chicken was served with two dips; an aioli and a sweet chili sauce. These little nuggets were so addictive and wasn't too greasy. 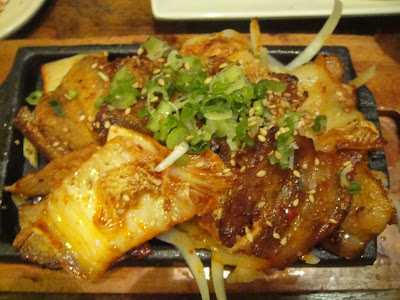 Buta kimchee: thin pork slices with kimchee. Kimchee is Korean pickled cabbage and is intensely sweet and sour. As such, you would expect this dish to be very flavourful. Instead, I felt that although the kimchee was well seasoned, it was not married with the pork. The pork was a bit bland and was dry. 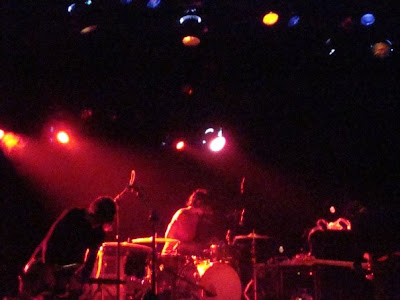 Dinner was satisfying and not too heavy a meal before a concert. After dining, we walked a couple blocks to the El Rey. Autolux is working on their new album to be released next year. Although they haven't released an album in five years, there were still hoards of fans who came out to see them. The theatre is a historical landmark that was initially a movie theatre and was converted into a music venue in the 90's. It is an intimate space with a ballroom and balcony, and vintage decor. The concert was off the hook and Carla Azar rocked it on the drums. 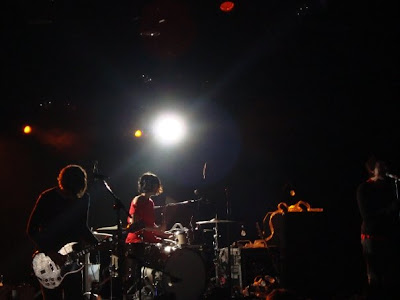